VIDEO CLIPS OF ITALY, ROMA, VENEZIA, NAPOLI AND OF THE 20 ITALIAN REGIONS Crystal clear waters, pink sand, a series of coves and rocks, blue cliffs rising from deep seabeds, intense colours: the Maddalena Islands (Province of Sassari) are a must for whoever wants to discover the beauties of the Sardinian Sea. The islands are located inside the Straits of Bonifacio along the north-eastern coast of Sardinia and can be reached by ferry from Palau in 15 minutes. La Maddalena Island is surrounded by Budelli, Caprera, Razzoli, Santa Maria, Santo Stefano and Spargi. This group of small granitic rock islands has been inhabited since prehistoric times. 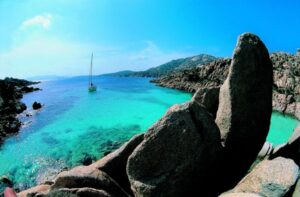 The Maddalena islands were known by the Romans as “Cunicularia” and were utilised as a maritime traffic crossing point during the second and first century B.C. This is testified by the remains of a number of old cargo ships that are an interesting destination for today’s diving excursion fans. The islands were first the object of a dispute between Pisa and Genova in the XIII century and subsequently were abandoned for a long period before being colonised again by Corsican shepherds and by the first Sardinian settlements in the XVI century. More recently they were used as a naval base and are presently one of the most popular destinations for boating tourists.

This is one of Italy’s most enchanting beaches and it is famous for its pink sand produced by the coral shattered by the raging sea. Today, it is a highly protected island. Budelli has a nine-kilometers coastline, a surface of 1.74 km2 and is populated by wild rabbits which live principally at its highest point: Monte Budello (88 metres). The island can be reached both with rented boats or organised tours from the nearby La Maddalena island. The best mooring places are the almost deserted little beach of Cala d’Arena (south-eastern point) and the Spiaggia Rosa (Pink Beach), a jewel which is threatened by uncivilised tourists who insist on collecting samples of sand and uprooting sea-lilies. The island should be visited during the low season in order to admire all its beauty. The most beautiful shores are the southern beaches of Cala Piatto and Cala Cisternone, the north-eastern beach of Cala del Cavaliere and the eastern beach of Cala Trana. A low but rich Mediterranean vegetation covers the island. The transparency of its waters and the endless supply of fish and crustaceans hiding in the countless granite ravines make it an excellent destination for underwater photography.

This island has been declared a natural reserve for the particular species of seabirds living on it (royal seagull, cormorant and peregrine falcon). The island’s name is linked to that of Giuseppe Garibaldi, an Italian patriot and fighter who lived in the XIX century and was one of the fathers of the Italian independence. He bought the island in 1855 and died there in 1882. His house is now a museum and a memorial chapel and the island itself is a national monument. Caprera is linked to La Maddalena island by a street built on a 600 metres long dam. The island was probably given this name because of the numerous wild goats living on it (Capra means goat in Italian). It is the second largest island and has a surface of 16 km2 and 45 kilometres of coastline. Monte Tejalone is the highest point (212 m). On the south-western side there is a very important sailing centre and the many coves and anchorages which can be found along the coastline make the landing easy. There are no hotels but only a resort with bungalows. The seabeds are a must both for naturalists and underwater archaeology fans. Many remains of Roman cargo ships as well as of the boat of Garibaldi were found there. History informs us that after the Roman occupation Caprera remained deserted for centuries before being inhabited by groups of shepherds. Later in 1855 the Hero of the Two worlds (Garibaldi) decided to settle there and lanted the first trees of the blooming pinevood which covers the island today. A century after Garibaldi’s death the island was freed from the numerous existing military restrictions and is now completely open to the public.

This is the island closest to Corsica and together with the islands Budelli and Santa Maria it forms the lagoon of Porto Madonna, It can be reached by boats rented in La Maddalena. It has little over 12 kilometres of coastline and a surface of 1.54 km2. The highest point of this pink granite island is Monte Cappello (65 m). The uninhabited island of Razzoli is separated from the island of Santa Maria by the narrow Passo degli Asinelli. This island is fascinating due to its waters abounding in fish and, in particular, due to the many bird species which live undisturbed on the island. Razzoli is the ideal nesting place for Royal seagulls, Sardinian sparrows, cormorants and large shearwaters. Turtles, dolphins and seals had been living there for a long time before becoming the object of a fierce hunt by fishermen. Only small groups of dolphins can still be seen in the waters around the island. The local lighthouse signals the presence of the group of islands. The jagged coastline of the island forms enchanting coves such as Cala Lunga on the south-western side, which is the only accessible one. Here the sea plays hide-and-seek with the rocks and penetrates into the many small bays such as Cala dei Morti, Cala Calaccia, Cala del Rosario, Cala dell’Acqua and Cala del Bue Marino.

This island is situated north-west of La Maddalena and is separated from Razzoli by the Passo degli Asinelli and from the island of La Presa by the Passo dello Strangolato. Unlike the other Maddalena Islands, only a very small part of Santa Maria is of granite formation. It has a surface of 2.5 km2 and a 10-kilometre coastline and can be reached from La Maddalena by rented boats. Wide areas of the island are flat with plants of grapevine. Birds are the real inhabitants of this island; they live in lentisk, myrtle, cyst and rosemary shrubs. The aquatic avifauna living in the pond of Santa Maria is particularly interesting. Accommodation is limited. If you are lucky and book well in advance, you can rent one of the very few small houses built on the island and spend your holidays there.

Santo Stefano has a surface of 3 km2 and lies halfway between the Sardinian coast (one mile from Palau) and La Maddalena, from where the same kind of transportation is available as for the two previous islands. It is a must for passengers on a cruise and a favourite destination for both the tourists and inhabitants of La Maddalena who visit the bathing establishment of Cala Fumata. The most beautiful panoramic view is from Punta dello Zucchero (101 metres). The island is almost completely uninhabited in winter and it is the only one with traces of prehistoric settlements and stone tools. There is a tourist village close to the beach of Pesce Lungo. For military reasons there is no public access to the western side of the island.

It is the third island in size but also the most isolated one along with the small islands of Spargiotto and Spargiottello and the numerous sharp rocks that rise out of the seabed. The island can be reached from La Maddalena by rented boats. The wonderful Gala Corsara, Cala d’Alga, Cala Caniccio and Cala Granara have borne the fame won by the island of Spargi after a Roman ship was found in Cala Corsara. The remains of the ship are now visible at the Museum N. Labroglia of La Maddalena. The island is divided into “tanche”, which are rectangular portions of land surrounded with stones, used to breed wild livestock. Spargi has no tourist facilities and is seasonally inhabited by shepherds. The highest and most panoramic point is Monte Guardia Preposti (155 metres).

Sardinian towns and cities, especially those along the coast, have a rich tradition of fish and sea food. Over the centuries the mixing of the traditions has evolved into a unique gastronomic experience. There is a large fishing industry catching everything from lobster to squill, from “astici” to spider crab, from prawns to scampi. The so called “faoni” crabs are fished in the sea beds around the Archipelago di La Maddalena. The mussels are used in both soups and “pasta” dishes, either with tomato sauce or in “green” which means to be cooked in olive oil, garlic and parsley. They are excellent grilled and as a stuffing for pancakes. The local recommended cuisine includes the ‘ziminio, the ‘coata’ soup, the ever-present bottarga (tuna roe) as well as the delicious spaghetti with lobster. A common way to cook fish is to cover the fish in coarse sea salt and bake it in an oven which preserves the original taste of the fish. Large sized fish can be cooked in white wine. The best results are obtained by using “Vermentino di Gallura DOCG”, which is a white, slightly aromatic wine.